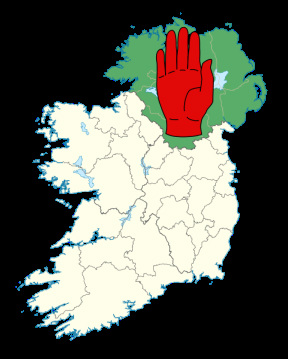 Northern Ireland also known as Ulster, was strongly opposed to Home Rule due to its' Protestant majority.[1] In 1886, Lord Randolph Churchill successfully rallied Ulster with the anti-Home Rule cry of "Ulster will fight, Ulster will be right!"[2] This was in protest of Gladstone's first Home Rule Bill of 1886. Churchill called the men of Ulster  to "play the orange card” which meant to stand together as Protestants and oppose Home Rule because it would bring about a Catholic government. [3] With the support of Ulster,  the first Home Rule Bill of 1886, and the Home Rule Bill of 1892 failed to pass. However, the Parliament Act of 1911 limited the House of Lords, which made Home Rule more of a threat because it could allow the third Home Rule Bill to pass.[4] Ulster's protests to Home Rule became even more radical and the Orangemen threatened militarization to oppose the measure. On September 28, 1912 close to a half million citizens of Ulster signed the Ulster Covenant which declared that Ulster would not except any government except that of Great Britain.[5] This set the stage for Civil War in Ireland, the separation of Northern Ireland from the Republic of Ireland, and the "Troubles" that dominated Irish Politics for the remainder of the 20th century.
[1]Bartlett, Thomas, Ireland: A History, New York, New York: Cambridge University Press. 2010, 338.